You can also visit us at JohnRDayJr.com and CowheadPublishing.com for more information.

A tale of family, friends, and four-letter words.

MAN ON THE FENCE 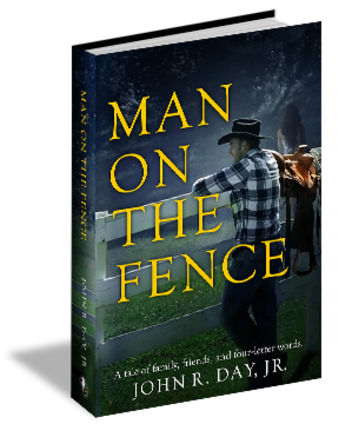 Congressman Tate Daniels had second-guessed almost every decision he'd ever made - with good reason. All he wanted out of life was to play for his beloved Detroit Tigers, take over the family farm, and settle down with the girl of his dreams. Funny how life works out. To make matters worse, Tate had managed to alienate friends that he'd known since their first Little League game in 1965. Perhaps it would be better to believe in fate than to take responsibility for his current position. One thing Tate now knows for certain - as he lie on the floor with a bullet in his chest - this isn't right.

Man on the Fence is a nostalgic journey of boyhood friends as they grow into men, husbands, and fathers until life's twists and turns create a rift that has the potential to turn deadly. Their relationships - for better or worse - with the spirited women in their lives create an equally heart-wrenching and heart-warming tale of family, friends, and farm life in which the characters are shaped by the typical trials of adulthood: sex, religion, politics, and death.​

The story continues with Man and the Machine.